Noah’s ark: Did it really take 120 years to build?

Most people believe it took Noah 120 years to build the ark. Today’s blog may surprise some of you. And many people think Noah’s 3 sons helped him build the ark, right from the get go. Keep reading. More surprises are in store for many of you.

One point of this blog is to encourage everyone to read the scriptures more carefully. The other point is how incredibly patient God is, even in the face of violence and sin and perversions that were so bad that God decided to end all land life on the earth except what could be placed inside that huge ark.

People lived a long, long time back then. Adam and Eve were still in their midlife when Enoch was actively preaching. Adam was there when Methuselah was born – and lived such a long time.

If you haven’t seen the Ark life-size replica in Kentucky, USA, I recommend you do. The single biggest impression you’ll be left with will probably be how huge that ship was. Plus, what an undertaking it had to be to build such a huge ship without all the modern tools and machinery and equipment we have today. Check out: https://arkencounter.com/about/

I only wish they had shown more animals in their ark like the ones we see today – and less of the dinosaur type, but other than that, it is a “must see”.

Genesis 6:3   “And YHVH said, "My Spirit shall not strive with man forever, for he is indeed flesh; yet his days shall be one hundred and twenty years."

Notice it does not say, “…yet I’m giving my man Noah one hundred and twenty years to build the Ark.” But that’s the assumption so many make!

And it’s not clearly said here whether this 120-year time period was stated to Noah or anyone – or just a conclusion God had made for himself. It’s true that God gave mankind another 120 years before the rains would fall – but that period of 120 years is not necessarily the same as the years Noah was building. The world’s doomsday clock was well underway into those 120 years by the time Noah was even clearly told to start building the Ark, as we’ll see.

Here’s what we’re clearly told. Keep these numbers in mind.

** We’re told God had decided there would be a final 120 years for mankind. (Genesis 6:3). It is NOT clearly stated that this timetable was said to, or given to anyone. It seems to be a private conclusion God had decided. If God told Noah of the 120-year deadline, then Noah would have been 480 years old – but we’re not told that. And his first son is still 20 years away from even being born yet!

** We ARE clearly told that Noah was 600 years old when the floodwaters came upon the earth (Genesis 7:6).

** We’re also told Noah was 500 years old when his first son Japheth was born to him (Genesis 5:32), and now only 100 years separate the birth of Noah’s oldest son and the time of the Flood, when Noah was 600 years old.

So, had you realized before that at the start of the 120-year timeline, Noah and Mrs. Noah had no children born to them yet?

Genesis 11:10 “This is the genealogy of Shem: Shem was one hundred years old, and begot Arphaxad two years after the flood.”

** The first time we actually have God CLEARLY telling Noah there would be a worldwide destruction by flood that would kill all living things on the earth, is in Genesis 6:13-18. God is – by that time -- mentioning Noah, his wife and Noah’s sons and their wives (verse 18) – which mathematically means Noah was at least 525 years old by this time, to allow 3 sons to be born to him and for them to be old enough to be married. That’s if that was indeed the first time God mentions it to Noah himself. That leaves a maximum of 75 years left in the 120-year countdown, for the Flood came when Noah was 600 years old (Gen. 7:6). So based on the statement GOD makes that includes Noah’s entire family and daughters-in-law (Gen. 3:18), the actual building of the ark could have been 35-75 years.

There is of course also the possibility that God was saying all that to Noah when he was still childless – as a matter of faith, just as God told Abraham he would be the father of multitudes of children, when he also was still childless.

BIRTH ORDER: By the time Noah had his firstborn – who was Japheth, Noah was 500 years old, according to Genesis 5:32. I realize, Shem is listed first in Genesis 6:10 and 7:13, but in the Bible, the most important one in Biblical history, or who had the most impact – or sometimes the most righteous one through whom God worked the most, ends up being listed first a lot of times. For example, Abraham was not the firstborn among his siblings either, but is also listed first.

So the real order of births of Noah’s children was this: Japheth, Shem and Ham – and yes, I know, we’re all used to saying “Shem, Ham and Japheth”, as the Bible itself does that as well (Genesis 6:10; 7:13) multiple times.

I suspect Noah had to have a LOT of hired help to cut down the trees, prepare the boards and build such a huge ship – whether he had sons or not.

How big was Noah’s ARK? Read Genesis 6:14-15 in a modern translation so you get it in feet. Go see the replica in Kentucky. A FOOTBALL field and a half long! Now imagine that. Picture that next time you see an American football field. That, and half again as long added to that. 450 feet long. 75 feet wide. Over four stories high – or 45 feet high. OK, modern cruise ships are much bigger, but still – this Ark was one huge ship! Imagine having to build all that!

Genesis 6:14-16 NLT   -- "Build a large boat from cypress wood [gopher wood, teak] and waterproof it with tar, inside and out. Then construct decks and stalls throughout its interior. 15 Make the boat 450 feet long, 75 feet wide, and 45 feet high. 16 Leave an 18-inch opening below the roof all the way around the boat. Put the door on the side, and build three decks inside the boat—lower, middle, and upper.”

I also believe that God may have tested Noah and all mankind by having a completed ark sitting there for some months or even years, without any sign of flooding or rain. Then when the time for the flood came, Noah had a one-week warning. That was it. (Read Genesis 7:1-20). 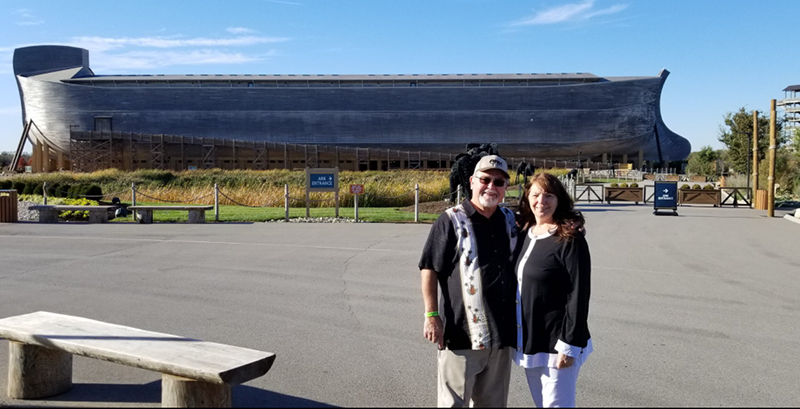 Here's a photo of my wife and I standing in front of the Ark replica. Go see it.

The ark by the end of that week had to be full of food and water for all the animals and Noah’s family, plus they had to get all the wildlife God was sending them into the ark and get them all settled in and organized, before the rains, floods and break-out of waters from the deep began to happen. Then God himself shut them in. God locked the doors (Genesis 7:16). Imagine that.

Where did all the water come from?

Besides torrential rains for 40 days and 40 nights, where else did all the water come from? Some scientists have said that under the crust of the earth there is more water than we see in all the oceans today. Scripture speaks of it as “the fountains of the deep”. God broke those open to flood the world, in addition to the enormous amount of rainfall he sent. No doubt this was a very, very scary time to go through – whether inside or outside the ark.

When God stopped the flooding, and began to order the waters to recede, he sent a lot of wind to dry things out (Genesis 8:1). And look how it’s worded (notice “fountains of the deep”).

Genesis 8:2 “The fountains of the deep and the windows of heaven were also stopped, and the rain from heaven was restrained.”

It took many more months before even the tops of the mountains could be seen – let alone before they could safely leave the ark.

There’s a lot of evidence of a worldwide Flood visible in the earth’s strata of rocks. Lots of it. Every culture around the world has some epic tale of the saving of a few people and animals. The best known one is the Epic of Gilgamesh.

I admit: whether it took Noah just 40-75 years to build the ark – or if he took all 120 years, that’s not a huge spiritual point. But it IS important to read and study the scriptures carefully enough to realize when we’ve been told something over and over that simply may not be true.

And, I’ve got to say this: the most recent Hollywood movies about Noah and the Flood are simply rubbish. They don’t follow the Bible’s descriptions at all. Don’t even waste any time watching them. They’ll put totally wrong concepts in your head and much of what they show are simply untrue, if you go by God’s word.

What will our resurrection body be like?
Did Yeshua (Jesus) really say these?

Our focus has always been on the Rock (who is Christ) and on the Light of the world (who is Christ), and on our heavenly Abba, our Father.  So this site is not about us but the website software requires some kind of bio. We felt led in 2004 to share Bible studies with others and to help people whom God was calling to come to their Messiah, and this website was born.

Philip was ordained in 1976 and has served sabbath-keeping congregations in Canada and the USA. He runs his own long-term care insurance agency along with his wife, Carole. Philip and Carole met in 1971 and have been happily married since 1975.  God has blessed them with three children and a total of SEVEN grandchildren:  5 in FL and 2 in WA.

Philip lives now in Leesburg, FL so they can be closer to their four grandsons and 1 granddaughter and his second daughter and her husband.  Philip and his website also support a group of 28 orphan children in Kenya.

By accepting you will be accessing a service provided by a third-party external to http://lightontherock.org/

We have 124 guests and no members online